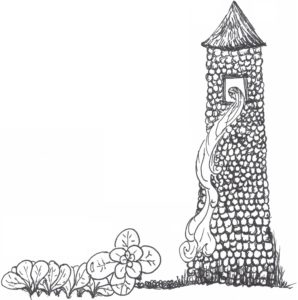 by Ian Robb and Caly McCarthy

Behind every seed there lies a story.  Some stories lie buried like the seed in the Earth.  Others come to light like the plant that emerges from the germinated seed.  Here is one such story, a variety of corn salad called New York Hardy.  Corn salad (Valerianella locusta) has many names: lamb’s lettuce, mache, and probably the most well known, Rapunzel, in Germany called Rapunzelsalat.  The story of this variety begins in Germany with a woman called Henrike Holdrege.  Henrike grew up in Marl, a town in the northern part of the Ruhr Valley.  She studied mathematics and biology and was a public school, and later, a Waldorf high school teacher in those subjects.  Although Rapunzelsalat was widely available in Germany, it was not until adulthood that she first tasted it.  Once she did, she readily enjoyed the mild, nutty flavor of this winter green.

Henrike met and married her American-born husband, Craig, in Germany.  They lived there for nine years and moved to the United States with their children in 1992.  Craig sought to bring an understanding of Goethean science, a subject that he had been studying in Europe, to the United States.  At the same time that Craig was studying Goethean science, Henrike was nurturing an interest in organic agriculture.  Among other factors, these impulses and areas of expertise led to the co-founding of the Nature Institute in Ghent, NY in 1998.

While settling into their new home in the early 1990’s, Henrike became aware that corn salad – the American name for her beloved Rapunzelsalat – was not available in her area.  Longing for that nutritious green she realized she would have to do something about it herself.  She was able to buy a packet of seeds and got ready to sow them.  A friend who lived nearby told her that corn salad would never survive the harsh winter.  Back in Germany, where her friend had also grown up, winters were not generally severe, so corn salad was readily available during the winter months.  In upstate New York, however, winters are a very different story.  Soil can freeze at Thanksgiving and remain in that way until late March.  There can be heavy snowfall to blanket the Earth, but not all the time.  The action of freezing and thawing soil disturbs the roots and stresses many plants, but, amazingly, not this variety of corn salad.  In the fall of 1992, Henrike did not know what might befall the corn salad plants over winter.  Nevertheless, she sowed the seeds in her small home garden.  To her delight, in the following spring, some plants had survived.  She was able to eat and enjoy the green rosettes, but she also left enough of those hardy plants to go to seed when the weather got hot in May and June.  Because corn salad has a propensity for shattering, Henrike took care to ensure that all the seed did not end up on the ground.  She cut the plants at their base before the seed was fully ripe.  Then she laid the plants on sheets to further dry in a light and airy place.  After the seed had dried, it was stored until ready to be sown in the early fall.  Without fail, Henrike has followed these steps every year for the last twenty-five and has enjoyed a corn salad crop from seeds born out of her own plants.

Throughout all of these years Henrike has remained enthusiastic about corn salad, and particularly about its capacity to participate in the local food movement.  She has eagerly told friends, farmers, and visitors of the Nature Institute about it, encouraging them to sow corn salad seed themselves.  Beth Corymb Everett, co-founder of Turtle Tree Seed, located in Copake, NY, was only 14 miles away from Henrike and the Nature Institute.  Due to the overlap in their work the two women met, and Henrike shared her experiences with corn salad.  She graciously gave Beth some seed to try at Camphill Village Copake, the home of Turtle Tree Seed.  In 2003, enough plants were grown and seed harvested that corn salad could be offered in the Turtle Tree Seed catalog, and they’ve been featured ever since.  Because the seed could be sown in the early fall and grow and survive a New York winter with absolutely no protection whatsoever, other than the possibility of snow cover, it was named “New York Hardy.”

In the mild climate of central Europe, Rapunzelsalat can grow throughout the winter season.  As gardeners choose Rapunzelsalat plants from which to save seed there is no reason to select for cold tolerance.  The winters there are so mild it’s a moot point.  Rather, they can select for disease resistance, flavor, and size.  Plant breeders can nurture or eliminate certain traits, but they can’t introduce new ones.  Nor can they guess the potential of plants.  Sometimes there are latent traits – one that have been nestled in the genetic memory for ages but haven’t had cause to be expressed.  Who was to know, for instance, that Rapunzelsalat – which grows throughout Europe in its mild winters – would ever be to be able to thrive unprotected in the harsh winters of New York State?  Somewhere deep inside the identity of Rapunzelsalat was the capacity to expand its horizons, to share its gift as a seasonal green with more people and in a place with more severe winters.

As summer wanes and fall opens up, the time to sow corn salad seed has arrived.  Corn salad seeds prefer shorter daylight hours in order to germinate.  Seeds that have dropped from the plant over the summer will wait  for days to get shorter and temperatures to cool before they germinate.  In the waning moments of summer sun it is hard to accept the darkness that will soon arrive.  Corn salad seeds unfold into plants with the last of summer’s strength before they wait patiently during the winter months.  When the ground begins to thaw corn salad continues to grow and brighten our late winter tables.

If you wish to enjoy these greens throughout winter, it is possible to sow them in cold frames, hoop houses, and greenhouses.  Perhaps they will satisfy the yearning for something green that the mother of Rapunzel had in the fairy tale.  The Brothers Grimm tell us that once upon a time there was a pregnant woman who craved something green with all her might.  Was it the taste she wanted?  The texture?  The diversion from soft carrots and sprouted potatoes in the depths of winter?  Maybe it was her body crying out for Vitamin C as it labored to create a new life.  The woman’s husband hated to see her so uncomfortable but the only green plants around were in the neighbor’s garden, so he went there and took some corn salad.  Once she tasted it, she needed more, and so the dutiful husband continued to take from the neighbor’s garden. The neighbor, however, was a witch, and when she caught him in the act she was vengeful.  She offered that he could take as much corn salad as he wanted, but he would have to give her the newborn child.  In his desperation he agreed.  When Rapunzel was born the witch took her away and hid her in a tower.  Rapunzel’s story continues but the dramatic beginning was enough to christen the winter green as “Rapunzelsalat.”

This winter green has a story that spans the space of continents and the time of centuries.  It is a story of a generous Earth, one that – in the words of Henrike – satiates “the need for green when there is no green.”  It is a story of hidden strength, and it is a cause for hope and gratitude.